The latest market snapshot reveals that rental markets were mostly flat across all our capital cities over the September quarter with most rents remaining at the levels recorded over the previous June quarter.

Perth continued to buck the national trend with rents falling again over the quarter to be now at five-year lows.

Vacancy rates, although still clearly the highest of all the capitals, are however now showing some early signs of stabilising.

Canberra and Adelaide were the only capitals to record increases in rents over the September quarter reflecting ongoing shortages of rental properties in those cities.

Melbourne and Canberra were the only capitals to record increases in house rents over the year ending the September quarter.

Annual unit rents however increased in all capitals except Adelaide which was flat, and Perth and Darwin where rents fell sharply. 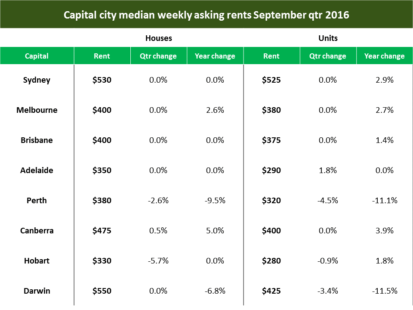 Although benign rental growth is a positive for tenants, this reflects low incomes growth rather than an increase in supply providing more choice.

Perth, Darwin and Brisbane remain the exceptions with sharply declining migration levels through the end of the mining boom providing a more positive environment for tenants with higher choice and lower rents.

Perth house and unit rents continue to fall although vacancy rates are showing early signs of steadying but remain at high levels.

Perth house rents have fallen by 9.5 percent over the past year with annual unit rents down by 11.1 percent.

Perth rents are now the lowest since the March quarter 2011 – over 5 years ago.

Although Perth vacancy rates remain clearly the highest of all the state capitals, rates for houses were steady at 4.7 percent over September and fell to 4.7 percent for units.

Sydney median weekly asking rent for both houses and units remained at the record high levels of $530 and $525 respectively.

Sydney unit rents have increased by 2.9 percent over the past year – second only to Canberra for annual growth.

Sydney house rents however were steady over the past year.

Melbourne median weekly asking rents for both houses and units again remained at the record levels of $400 and $380 respectively over the September quarter.

Melbourne house rents have increased by 2.6 percent over the past year with annual unit rents up by 2.7 percent.

House rents in Brisbane have remained steady over the past year overall with unit rents increasing by 1.4 percent.

Rising vacancy rates indicate the likelihood of continuing downward pressure on rents for both units and houses.

Adelaide rents were flat following falls for both houses and units over the previous quarter with vacancy for houses easing and units steady.

Both house and unit rents in Adelaide have also remained steady over the past year.

Vacancy rates for houses however remain tight at 1.8 percent with unit vacancy rates higher but steady at 2.2 percent.

After a prolonged period of increases, Hobart rents have decreased providing some welcome relief for tenants although vacancy rates remain clearly the lowest vacancy rates of all the capitals

Hobart rents for both houses and units fell over the September quarter – down by 5.7 percent to $330 for houses and falling by 0.9 percent to $280 for units.

Hobart house rents were steady over the year ending the September quarter with unit rents increasing by 1.9 percent.

Although rents have fallen in Hobart, vacancy rates remain very tight over September at just 0.6 percent for houses and 1.1 percent for units

Vacancy rates for houses have tightened although unit rates are still high and easing.

Darwin house rents were steady at $550 per week over the September quarter following 6 consecutive quarterly falls.

Unit rents however fell by 3.4 percent over the quarter to $425 per week – the lowest level in over 7 years.

Darwin house and unit rents have fallen steeply over the past year down by 6.8 percent and 11.5 percent respectively.

Darwin house vacancy rates continues to tighten and are now just above Sydney at 2.1 percent, unit vacancy rates however remain high and are still rising.

No relief for Canberra tenants with rents for houses rising again and units remaining steady with ongoing tight vacancy rates likely to continue to put upward pressure on rentals.

Canberra median weekly asking house rents increased again over the September quarter up by 0.5 percent to $475 with unit rents steady at $400.

House rents have increased strongly by 5.0 percent over the past year with unit rents up by 3.9 percent – the highest of all the capitals.

Canberra vacancy rates remain very low for both units and houses indicating the clear potential for further rent increases over the near-term although unit vacancy rates have eased recently.

Hobart clearly continues to provide the highest gross returns for houses at 5.65 percent and higher over the quarter with Sydney clearly the lowest at 3.41 percent but down over the quarter reflecting higher local prices. 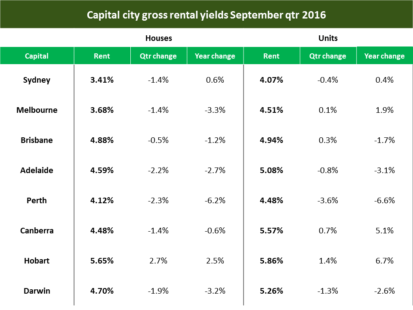 Yields for units also generally remained steady over the quarter with again Hobart the highest at 5.86 percent with Sydney the lowest at 4.07 percent.

To keep up to date with the latest property market information keep visiting our blog or facebook.

Would you share your home with fairy wrens? 🐦Check out the living room in rental #2 - it has some very special features!www.weloverentals.com.au/3-unique-perth-rentals-listed-in-2021/ ... See MoreSee Less

Are you looking for fairywrens in the living room, three luxury kitchens, or tree top views at your next home? View our unique Perth rentals from 2021
View on Facebook
· Share

FOR RENT | 19 Arania Place in Bedfordale5 🛏️ 3 🛁 2 🚗 on 3,003sqm PLUS a powered workshop💎 RARE Opportunity - Live In Luxury 💎Viewings are strictly by appointment only, so please call our office on 6254 6300 to tee up a time with Kylie, or get in touch via our website...www.weloverentals.com.au/rental/19-arania-place-bedfordale-wa-6112/ ... See MoreSee Less

ONE WEEK LEFT 🎁If you'd like to help a Perth family in need, there's still time to join our Christmas Appeal! Drop your donations into our office before Monday the 13th of December, and make someone's Christmas a little brighter ✨WHEREWe Love Rentals6/1451 Albany HighwayCANNINGTON, WA 6107WHAT CAN I DONATE?Please read the donation guidelines for gifts and groceries at the links below:Gift Guidelines - bit.ly/GiftGuidelines_ChristmasAppealGrocery Guidelines - bit.ly/FoodGuidelines_ChristmasAppealAnd if you can't get to our office let us know - we're more than happy to come to you ^_^ ... See MoreSee Less

Very excited to be participating in the Community REinvest Christmas Appeal again with @reiwa and @salvosWA 🎄 WHEN Weekdays between 9am - 5pm FROM November 15, 2021 - December 13, 2021WHEREWe Love Rentals6/1451 Albany HighwayCANNINGTON, WA 6107WHAT CAN I DONATE?Please read the donation guidelines for gifts and groceries at the links below:Gift Guidelines - bit.ly/GiftGuidelines_ChristmasAppealGrocery Guidelines - bit.ly/FoodGuidelines_ChristmasAppealWith the aftermath of COVID-19, and how hard it is to find a home right now, every donation big or small can make a HUGE difference to those who are doing it tough. If you'd like to help Perth families in need this Christmas, please drop in a gift or grocery item to our office and help us spread some joy this Christmas! ✨ ... See MoreSee Less

NEW For Rent | 25 Admiral Road in Bedfordale 4 🛏️ 2 🛁 2 🚗 on 8,068sqmBedfordale Dreaming!Register for the viewing with Jodie at our website...www.weloverentals.com.au/rental/25-admiral-road-bedfordale-wa-6112/ ... See MoreSee Less

NEW For Rent | 3 The Dell in Canning Vale4 🛏️ 2 🛁 2 🚗 with pets consideredImpressive Family Home!Register for the viewing with Jodie at our website...www.weloverentals.com.au/rental/3-the-dell-canning-vale-wa-6155/ ... See MoreSee Less

NEW For Rent | 6 Campbell Road in Armadale3 🛏️ 1 🛁 1 🚗 plus new flooring, bathroom, and paint job 👌Refreshed And Ready For You!Register for the viewing with Kylie at the link below...www.weloverentals.com.au/rental/6-cambell-road-armadale-wa-6112/ ... See MoreSee Less

NEW For Rent | 39 Kootingal Road in Armadale3 🛏️ 1 🛁 1 🚗 Family Home With New Carpets!Register for the viewing with Kylie Edmunds at the link below...www.weloverentals.com.au/rental/39-kootingal-road-armadale-wa-6112/ ... See MoreSee Less

NEW For Rent | 3/191 Railway Avenue in Kelmscott3 🛏️ 2 🛁 2 🚗 with new flooring and a fresh coat of paintConvenient Villa Close To Everything!Register for the viewing with Jodie at our website link below...www.weloverentals.com.au/rental/3-191-railway-avenue-kelmscott-wa-6111/ ... See MoreSee Less

Ready to rent your property? Our experienced property managers only manage 80 properties each, so they always have time to attend to you, your tenant, and your investment's every need.