All our capital cities have increased their vacancy rates in December 2017, according to new data released by SQM Research, with the number of vacancies Australia-wide increasing to 80,092; an increase on the month of November. Hobart’s vacancy rate continues to remain at a record low of 0.3% since October 2017.

Perth’s vacancy rate rose to 4.6% from 4.5% in November and remains the highest of any capital city.

In the bigger cities, vacancies increased materially in Sydney to 2.6% in December, up from 2.1% in November.

The rise in vacancies continue into December due to seasonality and those in Hobart and Canberra continue to face ongoing tight rental conditions and higher rents.

However, the rise in Sydney was larger than expected, if these current vacancy rate levels hold in January and February, Sydney will be a tenant’s market in 2018.

Adelaide was the only city to record a decrease, with its house asking rents declining marginally by 0.1% over the month.

Unit asking rents however, increased by 1.1% over the month.

The highest increase for houses was recorded in Darwin at 2.5% over the month, while asking rents for units jumped the most in Hobart by 6.7%.

Compare this to Hobart’s asking rents for units in November which actually had the largest drop at 3.6% in that month.

Sydney continues to record the highest asking rent in the nation for a three-bedroom house at $730.60 a week and also for units at $520.80.

Canberra follows at $606.10 a week for houses, with no change over the month. 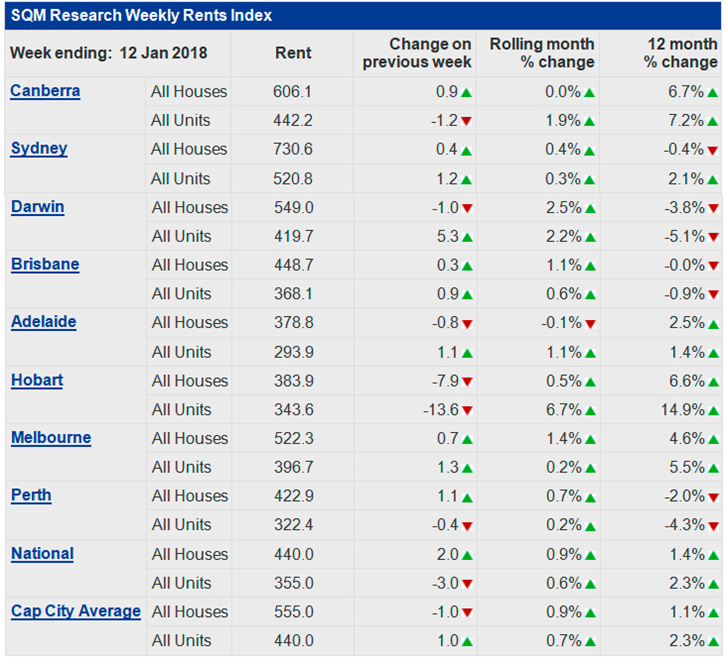 Perth rental prices for homes are predicted to smash new records in the coming quarter, with rents already 11.6% higher then they were last year! 🤯So are there any affordable suburbs out there? Read our March rent market update at the link below to find out 👇www.weloverentals.com.au/affordable-perth-suburbs-for-rentals/ ... See MoreSee Less

Our office will be closed today, as we commemorate the brave individuals who gave their lives to protect our future.Lest We Forget. ... See MoreSee Less

On behalf of the team at We Love Rentals, we wish you a safe and happy Easter 🐰 ... See MoreSee Less

Do you want to know why we are different from other Perth Property Managers? Follow the link below to find out more 👇www.weloverentals.com.au/tenants/why-rent-through-us/ ... See MoreSee Less

Happy #NationalPetDay from the We Love Rentals team, and a few of our fur-iends! 🐶🐱 ... See MoreSee Less

Want a responsive property manager? We can help!Book an appointment with our team today to chat about your property needs ➡https://www.weloverentals.com.au/landlords/request-an-appraisal/ ... See MoreSee Less

FACT: If you're applying for rentals and you have a pet, submitting a pet resume with your application can boost your chances of success 👏Here's 3️⃣ tips on what to include:1️⃣ A photo of your pet/s, plus their name, breed, temperament, age, and whether they will be residing inside or outside the property.2️⃣ A copy of your last inspection report with photos.3️⃣ Your pets' rental history with references (if possible). Plus anything else you think is worth mentioning about your furry friend (e.g. certificates of training in obedience, a Bachelor of Barks...) ... See MoreSee Less