Interesting article published by Michael Yardney of Property Update as he reflects over the Australian Property Market over the last decade.

A lot can happen in a decade.

In fact, a lot did happen over the last 10 years.

Now the reason for my reflective mood is that the 10th anniversary edition my first book How to Grow a Multi-Million Dollar Portfolio in your spare time has just been published.

So I thought I’d look at the following in a series of blogs the next 3 weeks:

When I think back to 2006, parts of the Australian property market were feeling sorry for themselves having come through a few difficult years following the Recession We Had To Have (as it was called by our then Prime Minister Paul Keating.)

In mid 2006 Median House prices around Australia were:

And while there was evidence that our property markets were starting to recover, there were still stories in the papers of the Sydney property crash with house prices having fallen 10% from their peak in 2003, especially in Sydney’s south western and western suburbs where rising petrol prices and the impact of repeated interest rate rises were pushing some homes owners into debt crisis.

However on the other side of Australia Perth house prices recorded a staggering 36.6% rise over the year making it the second most expensive capital city behind Sydney.

Back in 2006 about 70 per cent of the new dwellings we were building were on the fringe of our capital cities and inner-city living was in its infancy in Sydney and Melbourne.

A decade ago, in the first edition of How to Grow a Multi-Million Dollar Portfolio in your spare time, despite some people thinking I was crazy, I was bold enough to recommend buying well located residential real estate in Sydney and Melbourne.

Back then I spoke of the importance of holding residential real estate for the long-term to make the most of compounding growth over the years.

Nothing has changed, it’s still my view that the “investment grade” properties in your portfolio will ride out the short to medium-term ups and downs of market factors as long as you have adequate financial buffers in place and stay focused on your end goal. 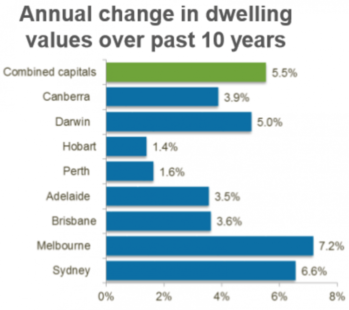 It’s interesting to look back now and realise that no one knew of the iPhone back then (well apart from Steve Jobs perhaps) and the seeds of the sub-prime crisis was already building in the US but not many people knew about it (or they weren’t talking about it at any rate).

Within 12 to 18 months, however, the rest of the world would be dragged into the Global Financial Crisis and any positive momentum in the Australian property market would corresponding come to a screeching halt.

Ten years ago variable interest rates hit more than nine per cent because of rampant inflation, but here we sit today with inflation going backwards and rates less than half that.

That’s an amazingly different set of statistics when you think about it.

So 10 years ago we were on the cusp of the biggest world economic downturn since the Great Depression and no one predicted it.

And there was nothing any of us could have done to prevent these major economic wobbles but one thing that strategic investors could do was stay their course and not panic.

Similarly, no one really predicted three of the most significant factors affecting our property markets over the last decade:

So one of the key differences in my personal investment strategy since that time is that I now look more into the future than the past, as I’ve realised you just can’t foresee the future looking in the rear view mirror, no matter how much research you do.

Instead today I focus my research on where future economic growth is likely to occur because this will lead to jobs growth, which leads to more people, more housing demand and ultimately to capital growth.

I’ve also further developed my 5 Stranded Strategic Approach to ensure that the properties that I invested in, and the ones that I recommend to our clients, are investment grade, which will likely weather any temporary vagaries of the national or global economy.

At the beginning of this decade (in 2010) I made a prediction that by 2020 Sydney’s median house price would hit $1 million.

Well, it actually happened in half the time that I predicted, which is another downside downside of forecasting!

In my next blog in this three-part series on the Australian property market now and then, I’ll outline how the markets have changed for the better and, unfortunately, for the worse.

To learn more about growing a multi-million dollar property portfolio, don’t forget to pick up a copy of the special 10th anniversary edition of my best selling book- How to Grow a Multi-Million Dollar Portfolio in your spare time.

WHAT WILL HAPPEN TO YOU IN THE NEXT DECADE?

If you want to become financially free through property, my advice is to stick to your original strategy- you do have one, don’t you?

This will mean that you won’t get distracted by all the market noise.

Think big picture and long term and remember that Australia’s population growth and our relatively strong economy will ensure that well located “investment grade” properties will keep increasing in value over the long term.

🚨 F I N A L W E E K 🚨The Salvation Army Sleeping Bag Appeal is entering it's last week, and we're still taking donations right up until the 30th! Our office, in partnership with our sister company Naked Edge Real Estate, is a proud community REinvest supporter and is a nominated drop off point.We are seeking donations of new or freshly laundered:🧶 Blankets📦 Sleeping bags🧦 Socks🧥 Coats#redshieldappeal#TheSalvationArmy#LeaveNoOneInNeed#winterappeal ... See MoreSee Less

FOR RENT | 152 Forrest Street in Fremantle 2 🛏️ 1 🛁 0 🚗FREO CHARM MEETS MODERN LIVINGYour perfect home is ready for you. A renovated 2 bedroom cottage with split systems in both bedrooms and one in living area assures year round comfort. With a modern kitchen complete with dishwasher draw, gas cooking and large led light windows perfect for the chef in all of us. Separate front living room, dining area and study nook, plus a rumpus room - more than enough living space for the entire family. The combined bathroom and laundry has been renovated. The spacious gardens are a gardeners delight, and the patio, complete with patio blinds is perfect for alfresco entertaining. Pets on application - register your interest nowWOULD YOU LIKE TO VIEW THIS PROPERTY? Simply go to our website and click on the Book Inspection button for the property, select a time and register your details. If no times are currently please register your interest through the "Book Inspection" link and tick "Viewing Times Not Suitable". You will be instantly informed when they do become available and you will also receive instant notification if there are any changes or updates to the inspection. Failing to register may result in you not being informed of any updates, upcoming inspections, time changes or cancellations to inspections. ... See MoreSee Less

The Salvation Army Sleeping Bag Appeal is still on and runs until June 30th.Our office, in partnership with our sister company Naked Edge Real Estate, is a proud community REinvest supporter and is a nominated drop off point.We are seeking donations of new or freshly laundered:🧣 Blankets📦 Sleeping bags🧦 Socks🧥 Coats#redshieldappeal#TheSalvationArmy#LeaveNoOneInNeed#winterappeal ... See MoreSee Less

FOR RENT | 9/65 Little John Road in Armadale This low maintenance villa has just had new flooring and paint throughout, and is now just waiting on its new tenants to move in! The fresh coat of paint and carpets isn’t the only perk to this property, it’s location is also a huge benefit. It is located approximately 750m away from the train station, with a range of shopping centres and schools only a short drive away! Inside you’ll find 3 bedrooms that all feature robes, and two bathrooms. The living room has a split system air conditioner to keep you comfortable. The kitchen has a separate pantry, lot’s of bench space, cupboards and a dishwasher. Outside you have a double carport, and low maintenance gardens. Features of the home include -- All bedrooms feature robes- Large living area with split system A/C- Kitchen complete with separate pantry, ample bench and cupboards and a dishwasher- Double carport- Small storage room- Low maintenance gardens with a small rear courtyard for entertainingProperty details: www.weloverentals.com.au/rental/9-65-little-john-road-armadale-wa-6112/ ... See MoreSee Less

FOR RENT | 119 / 54 Nannine Place in Rivervale2 🛏️ 1 🛁 1🚗 City? Airport? Night Out at Crown? No Problem!Imagine taking a stroll around the river after work and enjoy all that this location has to offer. This 2x1 unit will allow you to enjoy a lock and leave lifestyle that is close to the city, Crown complex and the airport.The kitchen includes a breakfast bar so the living area won't need to be compromised and a gas cook top is included. The two bedrooms boast plenty of storage and are of a decent size. The bathroom doubles as a laundry and has plenty of space so your washing machine will easy fit in.Meanwhile outside there is a very nice balcony to enjoy and relax upon. Also you can ensure that your car is kept secure as there are electric gates to park behind.- 2x1- Gated car park- Balcony- Close to city and airportView the property at: www.weloverentals.com.au/rental/119-54-nannine-place-rivervale-wa-6103-2/ ... See MoreSee Less

🚨 N E W B L O G P O ST 🚨This week we look into rental renovations and how to get the most bang for your buck. Read more at the link belowwww.weloverentals.com.au/rental-renovations/ ... See MoreSee Less

Please note our office is closed today for the WA day public holiday, we will be back to help you 9am tomorrow 🌞 ... See MoreSee Less